All about the GameStop Drama, Dogecoin and a New Market Paradigm

Loved it? Share with others
designeverest.com/lounge
All about the GameStop Drama, Dogecoin and a New Market Paradigm
By Ayushi Vanzara, OpenGrowth
22nd Feb'21

The month of February is commonly supposed to be the month of Love. Although, in the US, apparently it has been a month full of Wall Street Drama due to the series of events that have taken place from January.

Are you curious? Let me squeeze out all the juice we know.

Starting with GameStop, just to keep up with the chronology of the events.

For all those of you who are not aware of what is GameStop, Robinhood, or Reddit and what the fuss is all about, let me do the honours for you.

To begin with, you need to know a few names that will be thrown around a lot in this episode.

GameStop is an American video game and gaming merchandise retailer that sells video games and other electronic items. It is heavily affected by the Covid Pandemic.

So for all those interested in trading, have a forum named WallStreetBets where people discuss stocks and where to invest. It currently has over 9 million members.

Robinhood is an investment app specially designed for beginners who want an easy-to-use interface with no commission costs. It permits you to trade in stocks, options, ETFs, and cryptocurrencies commission-free.

Short Selling is a concept where an investor borrows a stock to sell it when the prices are high, hoping that the prices will drop. Once the price drops, they buy back the shares and return them to the lender, keeping the difference between the selling price and buying price as their profit.

Okay, let’s get into the details of this Drama.

- This all started when Ryan Cohen, co-founder and former CEO of Chewy Inc, invested $76 Million(9 Million shares purchased) at the end of last year. Around this time, the hedge fund holders betted that the prices of this gaming company will fall i.e. targeted short selling.

- In early January, GameStop announced that Ryan and his two other former Chewy colleagues will be taking three seats on the board of the company. This triggered the jump in share prices.

- The members of the Reddit community “Wall Street Bets” started buying shares i.e betting against the Wall Street investors, increasing its share price from $17 on January 1 to $469 on January 28th.

- Further adding fuel to it, Elon Musk(CEO of Tesla) tweeted “Gamestonk” on January 27th, boosting the prices to surge even more.

- Now, this completely changed the game for large hedge fund holders and Big Wall Street Investors, which resulted in huge losses for them.

- On January 28th, 2021, Robinhood briefly suspended buying stocks of GameStop and seven other companies after noticing an extraordinary rise in their value. After this, the stock prices of GameStop plunged miserably.

- This move by Robinhood and other trading apps left the market extremely volatile, which grabbed the attention of Social media and Congress, everyone criticising this unfair practice.

- The huge rebellion even made the extreme opposite US politicians- Republican Ted Cruz and Democrat Alexandria Ocasio-Cortez agree on calling for a hearing to know more about the decision to halt the trades.

Discover Now: Could Coinbase Be the Biggest IPO in 2021?

Well, it doesn’t follow the lines of the TikTok trend where you see a series of beautiful events that makes you emotional. Instead, it went the opposite way for GameStop and Robinhood.

- The Buying ban by the Robinhood apps whose mission is to “democratize finance for all” acted contrary and received furious backlash. This led to a huge Reddit Rebellion on Social Media that became viral, catching the eyes of Congress and a hearing was demanded.

- The US House Financial Services Committee had held a hearing on 18th February 2021 and was titled “Game Stopped? Who Wins and Loses When Short Sellers, Social Media, and Retail Investors Collide''. The hearing was held to know about the volatility in GameStop and the other seven stocks, Robinhood’s decision to temporarily suspend trading in these stocks.

- What happened at the GameStop Hearing?

Robinhood is compelled to place a deposit with Clearinghouse until trades are settled between buyers and sellers to cover the risks. On January 28th, the company faced a deficit of approx $3.4 Billion due to this spurt in prices of stocks which led to the temporary halt in trading.

Citadel Securities is one of the biggest revenue sources of Robinhood as they handle their orders. Kenneth Griffin had made an investment of $2 Billion in Melvin Capital on January 25th which suffered heavy losses. This has raised several questions regarding Citadel’s intervention in suspending the GameStop trade.

This whole episode has led to serious questioning about fairness in the US's financial markets.

Dogecoin is a cryptocurrency invented by software engineers Billy Markus and Jackson Palmer. Approximately 113 billion coins have already been mined.

- On 8th February 2021, Tesla announced its $1.5 Billion investment in Bitcoin and has further asserted that they will accept bitcoin as a mode of payment for their products.

- After showing full support to Bitcoin, Tesla CEO seems to have Dogecoin covered too.

- On 10th February 2021, Elon tweeted that he has bought Dogecoin for his son. 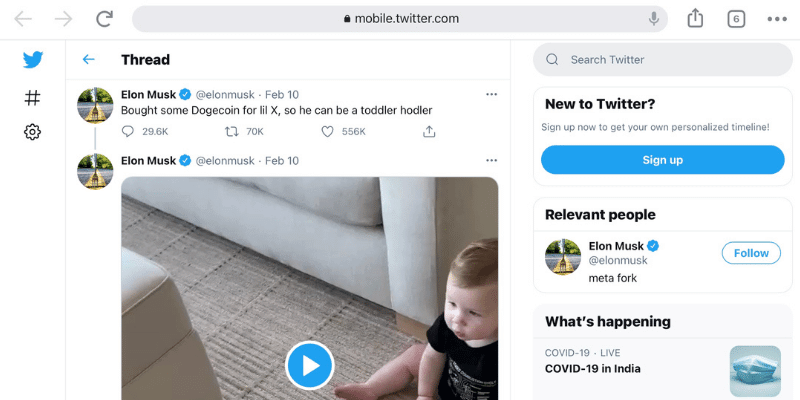 - This followed by a tweet on February 15th that said, “If major Dogecoin holders sell most of their coins, it will get my full support. Too much concentration is the only real issue IMO.” (imo = in my opinion) and “I will literally pay actual $ if they just void their accounts.”

- Earlier this month, Musk created a 50% surge in Dogecoin’s price in just 24 hours by a single word tweet “Doge.”

- In subsequent tweets, the Tesla and SpaceX CEO said "Dogecoin is people's crypto" and "No highs, no lows, only Doge".

Cryptocurrencies are the talk of the town. Bitcoin generally took away the audience but now with Elon Musk’s constant tweets about Dogecoin, people are becoming more aware of this one.

Must Read: Why 2021 Is Set To Be Even Bigger For Bitcoin?

- Cryptocurrency, the digital currency, could be our future currency if the issues of our current centralized banking system aren’t resolved.

- Cryptocurrency, as a digital currency has altered the concept of “value”.

- Crypto is modern money because the roots of the concept are born from the retail market. It is targeting audiences that are seeking an alternative to the traditional system.

- Although the US has not yet approved cryptocurrency and India is planning to ban it, looking at how volatile the cryptocurrency market is. The impact is huge and countries are not yet ready for it but it's hard to stop the spread though.

All these chains of events have assured that new investors will set their own rules for themselves. The gap between the large and small investors will bridge faster. With awareness and informed decisions, the possibility of unfair practices will be reduced.

To read more about cryptocurrency, refer to the below-given links:

Dreaming Of Becoming A Bitcoin Billionaire?

Bitcoin is a high-risk investment sector. Before you dream of becoming a Bitcoin Billionaire, ask yourself three questions. Read more

5 Crypto Investment Mistakes You Should Avoid in 2021

Bitcoin is still very confusing to many, exposing them to investments resulting in losses. To educate yourself with 5 such crypto mistakes that you should avoid, read more

To know how to convert cryptocurrency into cash, click here