Loved it? Share with others
designeverest.com/lounge
Bill Gates Comes up with a Master Plan to Battle Climate Change
By Ayushi Vanzara, OpenGrowth
25th Feb'21

“A transition into clean energy is about making an investment in our future.”

Climate change needs to be taken seriously now more than ever, and 2020 has been proof for that. Bushfires in Australia, Earthquakes in Turkey, Locust and Cyclone attacks in India, and several other such horrifying natural disasters took place in 2020.

It is high time businesses, and leaders talk about it to spread awareness.

Bill Gates, the co-founder of Microsoft, is a technologist, business leader, and philanthropist. He just released his new book titled “How to Avoid a Climate Disaster: The Solutions We Have and the Breakthroughs We Need,” in which he has a plan that shows how the U.S. could take the lead in the fight against climate change.

The introduction of the book is titled “51 Billion to Zero” and starts with Gates saying that we need to know these two figures to understand climate change. Further explaining what these two numbers signify. Fifty-one Billion signifies the number of tons of greenhouse gases that the world generally adds to the atmosphere every year and Zero is what we aim for.

“[We] need to revolutionize the world’s physical economy—and that will take, among other things, a dramatic infusion of ingenuity, funding, and focus from the federal government. No one else has the resources to drive the research we need,” Gates writes.

There couldn’t be a better time for Bill Gates to come up with this master plan.

Must Read: 5 Reasons to be Optimistic about Clean Energy in 2021

This $35 billion figure is a figure that equates to the government spending on medical research.

He believes that this could lead to a generation of more than 370,000 jobs while boosting a clean-energy agenda.

He says the U.S. is not the only country that underfunds clean energy research. “All the governments in the world spend about $22 billion a year on it, or around 0.02 percent of the global economy. Americans spend more than that on gasoline in a single month,” he adds.

There is a need for the creation of a central organization that is responsible for evaluating and nurturing innovative ideas like the National Institutes of Energy Innovation.

"There are few specific lessons from his book that Bill Gates asserts should guide the creation of the National Institutes of Energy Innovation like:

An Institute of Transportation Decarbonization, for example, would have a mandate and budget to invent low-carbon fuels for hard-to-decarbonize activities such as aviation and maritime shipping. Unlike the current structure, there would be a single chain of command responsible for meeting this goal. Other institutes would have similar responsibilities and authority for research on energy storage, renewables, carbon capture and management, and so on.

Each institute should be tasked with working on every aspect of getting new products to market, from basic research to commercialization. It’s not enough to develop a new way to store electricity that works in the lab-to have any impact, it has to be practical and affordable in real-world settings. The best way to ensure that is to encourage scientists to start their research with the end-use in mind, and that there’s a system in place to make sure the best ideas make it to market and reach scale.

The institutes should be located all around the country, the way the DOE’s national labs are now. There’s no good reason to limit the benefits of the innovation economy to Washington, D.C. or major research hubs like Boston and San Francisco.”

He says we also need to increase the demand for new clean-energy tools and lower their prices. 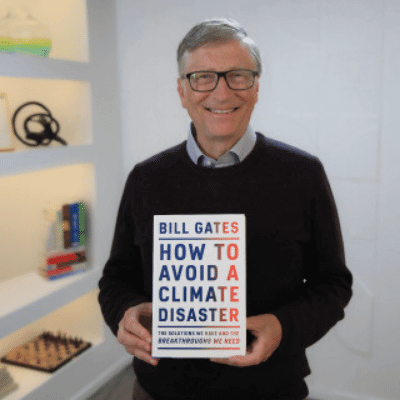 Further, one of the core ideas in his book on climate change is that he says, “...we can accomplish both through innovation and through public policies like tax incentives and clean energy standards.”

Gates is optimistic that we can avoid a climate disaster if we can wisely deploy the existing clean energy tools and make big breakthroughs every year.

Let us know your views in the comment section below.

To read more such related blogs, refer to the below-given links:

An Overview of the ESG (Environmental, Social, and Governance)

To learn about what is Environmental, Social, and Governance, and ESG investing, click here

Do you know what self-healing concrete is? Find out

Learn what is a fuel cell, plug power, and fuel cell energy and which among them is a better option to buy. Click here