“We shouldn’t be living our lives in constant fear.” - #NeverAgainTech

Whenever any unfortunate incident occurs, be it a planned shootout, bomb attack, or an accident, we take out social media to express our anger and give condolences to the family. After a few days, we forget. But, a 17 years old girl did something magical when she decided to find the solution to avoid such accidents rather than posting about it on social media.

When Shreya was in high school, her laptop was hacked, and she was disturbed thinking that someone halfway across the world had access to all of her secure information, and she could not do anything about it. That is when she became interested in technology, specifically cybersecurity, and decided to protect the data which are vulnerable to such attacks.

Shreya Nallapati was 17 years old when she heard the speech by student activist Emma Gonzalez addressing Emma’s 17 classmates’ death at the Marjory Stoneman Douglas High School shooting in Parkland, Florida. She was deeply moved by the powerful speech and decided to use what she knows best: Technology, to do something to bring a positive change.

Shreya was fed up with government officials and leaders’ lack of action to end mass shootings. So, she turned to her online community of young women in technology and typed a simple but powerful message in all caps She wrote, “THAT’S IT.” In less than an hour, she got the responses from more than 200 young women across the U.S., which was the beginning of NeverAgainTech.

NeverTechAgain is a tech platform led by teenage girls in a world dominated by men. It uses predictive analytics and artificial intelligence to minimize gun violence and potentially prevent the next mass shooting.

Founded by Shreya Nallapati, NeverTechAgain analyzes historical gun violence data based on factors such as the socioeconomic status of the perpetrator and the availability of firearms in the affected state and implements predictive analytics to assess the likelihood of the next attack. 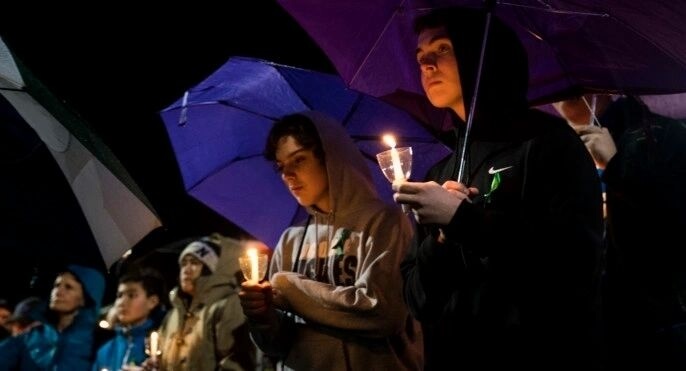 The team analyzes administrative data sets from places like Stanford, the CDC (Center for Disease Control), and Mother Jones by using natural language processing tools. Along with that, a set of predetermined factors like the place of residence of the shooter, the location of the shooting, the prevalence of drug abuse and neurological disorders amongst the shooters, analysis of the motives, the demographics of the shooter, amongst others are used to extract the entities. Once they find the entities, the data is put into optimization software that gives an idea of the common constitution of a mass shooting and the details of the next likeliest attack.

The initiative was led by 200 young women who are passionate about computer science and social activism. Currently, they are working to develop a patent-pending algorithm that uses social media mining to conduct threat analysis.

Various leading magazines and websites addressed this amazing move by Shreya Nallapati and NeverAgainTech has been featured by Forbes, Smithsonian Magazine, Amy Poehler’s Smart Girls website, and several books that focus on innovative solutions to humanity’s most pressing issues.

Challenges faced as a woman in tech

Women always have to travel a tougher road when climbing the ladder of their ambition and dreams, whether in terms of opportunities or various stigmas. When Shreya Nallapati went to one of the cybersecurity competitions, she was the only girl on the team. The guys made fun of her by telling her, “Hey, we’ll let you stick with the documentation because we don't think you're capable enough to do the Linux work.” That was the most important part of the project, and she felt scared and belittled.

But, she stood strong as she learned from her mom that the best thing to do is to take charge of the situation and remain confident in her abilities. And she ended up placing higher as a solo girl than that entire group of boys at the state competition.

She always gets inspired by her mother. She is the former CIO [Chief Information Officer] for the state of Colorado and the first woman of color on Governor [John] Hickenlooper’s cabinet. Her story of traveling from India to the [United] States to unrelentingly pursue her dream has been motivating for Shreya Nallapati.